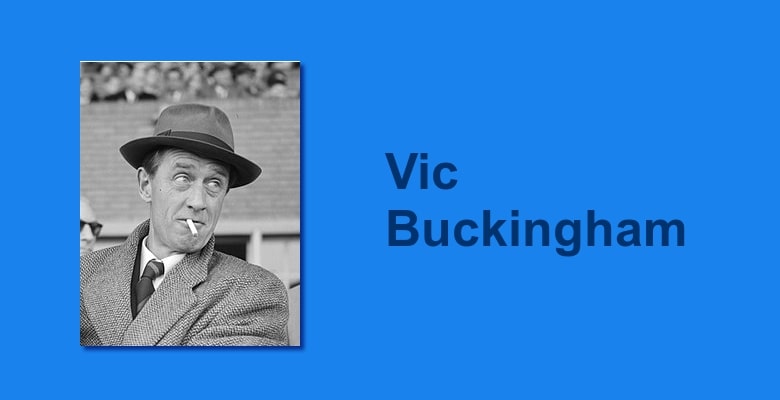 Victor “Vic” Frederick Buckingham was born on October 23, 1915, in Greenwich, England, and he is one of the greatest revolutionaries in the history of football without the recognition he deserves if we consider his great contributions. He was a Tottenham Hotspurs player from the mid-1930s to the late 1940s, from where he began his managerial career.

Buckingham took a considerable step through English amateur football to gain some managerial experience until he was presented with the opportunity to manage Bradford Park Avenue, who played in the Third Division North, from where he called the attention of West Bromwich Albion to take the manager position at the Club in 1953.

With Vic on the bench, West Brom became a very attacking-minded and entertaining team that played open and modern football. In that first season, Buckingham led the club to a deserved second place in the Football League First Division, finishing behind champions Wolverhampton Wanderers, who won their first ever English first tier league.

That same year the Baggies won the FA Cup, facing Preston North End in the final, in a great match where Ronnie Allen scored the first goal although The Lilywhites equalized only a minute later. At the start of the second half, Preston North End went ahead with Charlie Wayman’s goal and a penalty in the 63rd minute helped Allen score again, this time from the penalty spot. When it looked like the game was headed for overtime, Frank Griffin made the winning goal in the 87th minute.

That achievement led them to contest the 1954 FA Charity Shield against Wolverhamton, in a fantastic match that would end in a 4-goals draw, with a hat-trick by Ronnie Allen. The Wolves were winning 2-0 and then 4-2, but the Baggies managed to equalize the match, which at that time, at the end of a draw, was shared, that is, overtime or penalties were not disputed. Buckingham would be the longest-serving manager at the club after World War II, staying until 1959.

Buckingham’s ideas were not fully appreciated in England and this led him to accept the offer from Ajax in the Netherlands, in a league that was much less professional and lacking a great international image.

To Vic this did not seem important and those attacking game ideas that in England did not have the impact actually had it in the Netherlands, laying the foundations for what would later become Total Football through Rinus Michels and Johan Cruyff. “If you have the ball, keep it, that way the opponent cannot score”, a phrase that many years later would be attributable to Cruyff, was really part of Bukingham’s teachings to the Dutch.

After a stint at Sheffield Wednesday, a brief return to Ajax, Fulham and Greek football, Buckingham arrived at FC Barcelona where he managed to lift the 1970-71 Copa del Generalissimo, defeating Valencia CF 4-3 in overtime. Sevilla and again Greek football would be Vic’s next destinations until the end of his managerial career. On January 26, 1995, Buckingham passed away in Chichester.