The move from The Four Acres to Stoney Lane came from a need to move to more spacious accommodation due to the growing popularity of the club. Several sites had been viewed until a lease was offered by a local undertaker Mr H. Webb, who owned a field at the rear of the Sandwell Brewery. The lease was for seven years and an annual rent of £28 was agreed. Work began almost immediately to convert the ground into a suitable home for The Albion.

The field was returfed and ashes were laid around the playing area. A wooden grandstand affectionately known as The Noah’s Ark Stand was built It was on the Brewery side which ran along Sandwell Road North which was covered in the centre for 600 spectators.

The uncovered portions at each end held a further 1500 spectators. The opposite side of the ground was covered in ash and it was gradually raised back so everyone got a good view although it had no covering at all and could have been very slippy on rainy days.

Over the fifteen years spent at Stoney Lane this was probably the clubs most successful playing over 350 games there and losing only 70. They scored over 900 goals and were undefeated in 14 consecutive FA Cup matches between 1885 and 1893 that run ending with a 3 – 2 defeat by Blackburn Rovers in the First Round.

In the 1885-86 season WBA beat Aston Unity 4 – 1in the First Round, which began a run to their first ever FA Cup Final appearance. The tie took place 31st October 1885 in front 0f 4,027 fans at Stoney Lane. Two goals each from Tom Green and Ezra Woodhall put the Albion safely through to Round two to face local rivals Wednesbury Old Athletic again at home.

Wednesbury were seeking revenge for being beaten 4-2 by The Albion the previous season again in Round Two, only 3,578 turned out for a thrilling game which ended 3-2 with Loach scoring two and George Bell the third.

Albion received a bye in the third round but on Saturday 2nd January 1886 Albion met their Arch rivals Wolverhampton Wanderers  for the first time in the FA Cup, although the two sides had met in four friendly’s – Albion winning 3 and twice in The Birmingham Cup drawing 1 – 1 and Albion winning the replay 2- 1.

This was however the first time the two sides had met in a major competition. Bell, Green and Loach again not disappointing the Home crowd of 5,196 with a 3-1 victory. On to Round Five and another home tie facing one of the older teams of the FA Cup Old Carthusians.

Old Carthusians first entered the FA Cup in the 1879 -1880 season the year The Strollers were formed and in fact won the cup on their second attempt in 1880 – 1881season.

Beaten semi finalists in 1883, 1885, they were a high scoring team who despite getting byes in the third and fourth round had scored 8 goals in this seasons competition and were much fancied to go all the way this season. January 23rd 8,137 saw a hard fought game with again Tom Green scoring the winner in a 1-0 victory to put Albion through to the last eight.

Brentwood, Blackburn Rovers, Small Heath Alliance, Redcar, South Shore Swifts, Old Westminsters, West Bromwich Albion. all waiting for the news of who they would meet in the 6th round Albion hoping to avoid  the holders and the team who ended their previous cup run Blackburn Rovers.

The draw was kind another home tie against unfancied Old Westminsters. Albion made light work of this tie with a 6-0 victory A hat trick for Gem Baylis , 2 for George Bell and one for Spry Woodhall. Gem Baylis’s hat trick was the first by an Albion player in the FA Cup.

The semi final to be played at Aston against Small Heath Alliance who would change thier name two years later to Small Heath and then in 1905 became Birmingham City. 4,100 turned out to witness Albions 4-0 victory Loach 2 Woodhall 2 to reach the final of the competition to be played at the Kennington Oval.

The opponents were Blackburn Rovers, who were appearing in their third successive final. Four of the Blackburn’s  players, Fergie Suter, Hugh McIntyre, Jimmy Brown and Jimmy Douglas were playing in their fourth final in five seasons.

Fred Bunn was Albion’s  first-team centre-half at the time. However, he got injured and Charlie Perry replaced him for the final Albion  dominated the match but Herbie Arthur, the Blackburn goalkeeper, made several good saves and the game ended in a 0-0 draw attendance 15,156 with gate recipts of £650.

16,144 saw the replay which took place at the Racecourse Ground, Derby. A goal by Joe Sowerbutts gave Blackburn Rovers an early lead. In the second-half James Brown collected the ball in his own area, took the ball past several WBA players, ran the length of the field and scored one of the best goals scored in a FA Cup final. Blackburn now joined the Wanderers in achieving three successive cup final victories.

This was a magnificent achievement by Albion for a team of amateurs. Seven members of the team that reached the 1886 FA Cup Final still worked at Salter’s Spring Factory. This included Bob Roberts, Charlie Perry, George Woodhall, George Timmins, Ezra Horton, George Bell, and Harry Bell. All eleven players were born within a six-mile radius of West Bromwich. At the time the town had a population of 56,000 people. 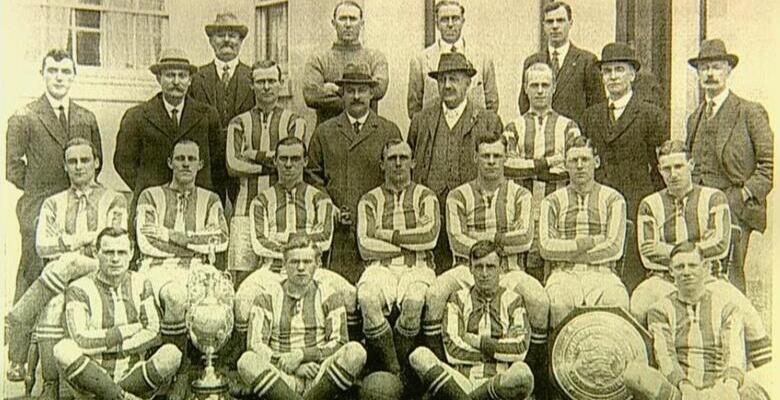